"Wild Oak is Wild Oak. If you have any questions, don't come."

The Wild Oak Trail is a 25+, 100+, and 200+ mile trail race in the George Washington National Forest near Mt. Solon, Virginia. The course is a 25+ mile loop with roughly 7,000 feet of vertical gain per loop.  While much of the trail surface is runnable, there are also rocky, difficult stretches that make smooth running very challenging, even for elite runners. Even finding the trailhead can be an adventure.

There is no official aid. The course isn't marked. This not your average trail race.

The trail path was altered in the summer of 2016, adding mileage and resulting in the loss of some of the original elevation gain. Reference previous course records set on the old trail course in the past results page.

If you don't know about TWOT, the spring edition, or Hot TWOT, the fall edition, please learn more about them before you consider participating, both for your safety and the safety of the race.

Since this is a semi-invitational, here are some guidelines to help you determine if you are "invited", or, more aptly, not invited:

the when AND hOW?

There are two events under The Wild Oak Trail run banner. TWOT takes place in the chilly vestiges of February and  Hot TWOT examines the last of the leaf color changes in October. Temperatures vary and will likely be challenging.

Please note that the event is usually held on the second weekend of February and October (in case we're still out there...).

Available entry slots are limited per forest service permit. For all events, please kindly register in advance via thewildoak100@gmail.com. Registration must include information as currently detailed on the website plus a list of a few running accomplishments (both official and unofficial results accepted). If you are unable to attend, send an advance notification to the same email so your spot may be transferred on to another unfortunate on the waiting list, if one has been created. See more on registration under registration below.

At a minimum, runners registering for the 200+ mile distance must have finished a 100+ mile TWOT distance or must submit valid additional reasoning for consideration for entry if no 100+ mile at TWOT has been completed prior to race day. Serious intentions only, please.

you may ask yourself, how do I get there?

Directions that may work:

There is limited parking in the small lot right at the trail head. Only 100+ and 200+ mile participants are to park at trailhead (if there is room. There will likely be other trail users using the small lot, too).

A secondary parking option is back down FDR 95 at its junction with Tillman Road/Tilghman Road, roughly 100 yards from the parking lot entrance. You would be wise to park here instead. Do NOT park in front of the entrance to the girl scout camp (Camp May Flather), which you will pass just before the road junction on your way in. And do NOT park in front of any gates! See Antoinette or Guy for clarification if you arrive and have questions regarding the parking. Please carpool if possible, as parking can be tight when we get too many vehicles.

WARNING!!  Some navigational aids, such as Garmin, have provided unreliable directions to the start at the TWOT lot. In the past  Google Maps is reliable, and a query of "Wild Oak Trail, Fr 95, West Augusta, VA" will lead you directly to the correct parking area.  To be safe, use the directions here and consult a paper map. 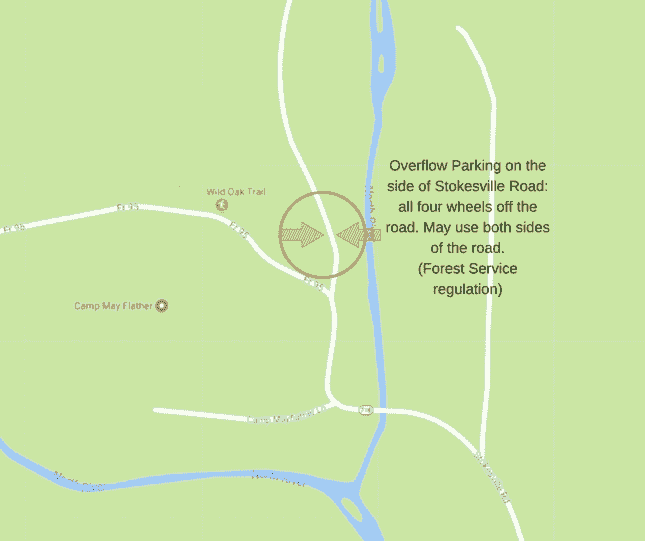 We are happy to accommodate dropping the bags, however picking them up is the responsibility of the runner. Bags are to be marked with runner name and cross-road destination.

Note: All foods in these bags must be sealed with bear resistant pouches. Bears tore a bin to shreds in 2017. For  good stories about this event, ask Ed Rangle and Dennis Herr who also witnessed this unusual occurrence.

Prepare for a delay in the results going live. Maybe a week, maybe a month, but in the past, amendments have taken more than a year.

There are no official facilities other than the woods. Bring a trowel and a baggie or two.

Before each loop, runners must self-assess to determine they are in condition to last an entire loop. If a runner drops at one of the road crossings, no one will be there to give a lift back. It is a 9 mile trek to the Main Lot from the road crossings; all runners are encouraged to know the way back.

Please Note: We do NOT encourage runners to accept rides from strangers.

Dennis Herr and another animal a few years ago... (photo by Dr. George Wortley)

WHO THE BLOODY HELL IS DENNIS HERR?


If you don’t know who Dennis Herr is, read up on him before you come. This is his race you're running. Ask your running friends before and during the event, they’ll know.
If you don't have any running friends who know, get some new ones who do, or read this:

Dennis is an athletic animal, hence his nickname Dennis “The Animal” Herr. He created Wild Oak 30 years ago, making it one of the longest-running, grass-roots ultramarathons in the country. He first ran Old Dominion 100 miler in 1982. He was a Barkley “Fun Run” finisher in 1991, winning by running the furthest distance covered that year. He ran Barkley from 1990-1995 and 1999, completing 1 loop each time. “The Animal” was known as an aggressively competitive athlete with his skill sets ranging from runner to mountain adventurer to road cyclist and triathlete. He expanded his dominance over the East Coast mountain scene to the West Coast where he tackled 14ers. Today, Dennis mountain bikes tens of thousands of miles per year. Wild Oak is only one of many events he has organized and coordinated.


Please kindly note: Because of a cycling accident, Dennis lost his hearing and sense of balance. When you speak with him, look him directly in the face and articulate clearly. Do not be surprised if he leans on you for balance.

Also note: The most important quality of Wild Oak is respect. Respect for race policies and traditions, fellow adventurers, and especially the terra firma you will travel.

In 2016, Dennis Herr passed the TWOT reins onto Anotinette Landragin, the current RD.  Antoinette's raced 8, 12, and 24 hour events, 50k, 50 milers, 100 milers, and finished the 2013 Tom's Run 200 miler, which got her thinking... While retired from racing, she is a proclaimed Barkley and TWOT sideline warrior, a wine scholar and educator, business owner, and avid international traveler. And she just might surprise you by cheering and jeering you on somewhere on the course. She can stay awake longer than anyone you know.

In 2019 after a lengthy and heated search committee review and vetting period,  TWOT vet Guy Towler was ordained as Assistant RD. Guy's a three time TWOT finisher, including rising to repeat offender status (Cold and Hot TWOT finishes in the same year) in 2017. He's raced all over the eastern seaboard including finishes at Massanutten Mountain Trails 100, and the Cloudsplitter 100. He loves tough mountain courses, crewing and pacing friends, and is a recent volunteer of the year nominee. Wanders often - never lost. He can be reached at guy.towler@gmail.com

The Wild Oak National Recreation Trail was created by the Forest Service in 1979 and the fee-based 50 miler was dreamed up in '88.  The original course included 19 miles of roads in the North River Gorge along with The Wild Oak Trail (TWOT) extended on the southwest corner to the edge of Ramseys Draft which included Hiner Spring, Hardscrabble Knob and a section of  the Shenandoah Mountain Trail.  It was morphed into a Double TWOT loop in 1995 and changed to a no-fee event in '01.

The 1990 fee-based 50 miler on the original course was, competitively, the most blistering one ever with times of 7:42, 7:44 and 7:47 by Dave Drach, Eric Clifton and Tom Bugliosi respectively.  Dave's time of 7:42 was done on the old and faster course of a loop in the valley by one on Wild Oak in the mountains. This also applies to Eric and Tom's loops. Sadly, Dave and Tom are no longer with us.

The Oct. TWOT was added to the Feb event in 2004 due to a high demand for some Hot TWOT.  My intention was to make it my 4th completion of the year along with Massanutten, Big Horn and Hardrock.  Was stymied by being hit with a. fib. (atrial fibrillation).  It has plagued me for 30 years.

If running is a dance of human exuberance then The Wild Oak Trail is a splendidly confusing mosh pit of painfully exhaustive solitude.

Dennis Herr and Antoinette Landragin console a weary John Kelly after his, and the only, sub-24 (23:48) 100+ mile completion in 2018. Learn more about his adventure here.

John Kelly, March 2021: "TWOT is one of those events that captures the essence of what I love about ultrarunning: an incredible challenge focused on personal goals rather than hype and fanfare, a beautiful course, and the opportunity to share it all with a great group of people out there after the same thing. Of all the things I've done in ultrarunning that are much more widely known, my weekend at the 2018 TWOT 100 will always be one of my most cherished experiences and my sub 24 hour run there one of my proudest achievements."

Please include in your email:

Runners are responsible for themselves and are required to sign a liability waiver before race start. All expenses of search and rescue are the runner's responsibility. The Wild Oak Trail Run management takes no responsibility whatsoever for any losses, injuries, or expenses occurred while runners are on the trail.

Since the Covid 19 pandemic began, our efforts have included supporting and contributing locally and minimizing costs for participation.

2) offering full refunds of entry fee ($15) to the 100 miler entrants who finish their race;

4) highlighting local businesses we frequent in the area including Stokesville Market (look for Sasquatch!), Sole Focus Running and Chicano Boy Taco in Staunton, Bluestone Running and Brothers Brewing in Harrisonburg.

Please help us add to this list and support these local resources.

New in 2020 is an 8 lap, 200+ mile challenge with a 98 hour time limit. Runners will begin on Wednesday morning at 8 a.m.  Like the 100 mile challenge, this is completely unsupported with no pacers, no crew, and no spectators permitted.  This is a demanding and exhausting course. Please don't  overestimate your abilities. You've been warned.

In addition to registration requirements listed to the left, participants must provide a detailed explanation as to why they are qualified to run this distance.

Trails Collective Weekly had this to say about the 2021 event:

(The Wild Oak Trail Run discussed around 25:15) and the "refreshing" follow up:

The chosen entry category of 1, 4, or 8 loops is to be declared at registration via email to the RD.  Changes to a declared intention, represented here as a change in the number of loops in either direction, will result in the participation being categorized as a “fun-run” for the runner with no official finisher’s time recorded for any distance.

There will be no aid stations, no pacers, no crew, and no spectators. Drop bags will be facilitated, with runners required to pick them up at the end of their race. Runners are required to self-manage and self-extract. This is a demanding and exhausting course, known to be one of the the most difficult on-trails ultramarathons on the east coast. Please don't overestimate your abilities. You've been warned. Zero tolerance and automatic DQ for the following: littering, poor sportsmanship, visibly inadequate preparation, inability to follow race rules.

Past results can be accessed via the Virginia Happy Trails Running Club's The Wild Oak Trail 100 Mile website. Thank you to Quattro Hubbard his maintenance of this website. VHTRC is not officially a sponsor of the race, but their support is appreciated.